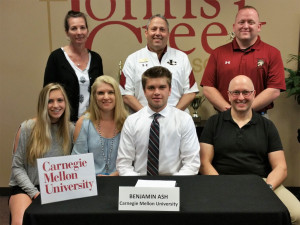 Benjamin Ash has played tennis for eight years, including all four years at Johns Creek High School  He has been ranked as high as 8th in the State of Georgia, and 27th in the South.  Other accomplishments include being a two-time winner of the Southern Sportsmanship Award, a starter on varsity all 4 years, winner of the 2016 Gladiator Award for Best All-Around player, and selected to play in the New Balance High School National Championships at Harvard University.  Congratulations Ben!