Congratulations to Mr. Hamilton on a successful football career.  Johns Creek wishes him all the best. 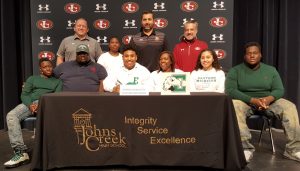