On Wednesday, November 20th, the Johns Creek Athletic Department hosted it’s first college signing day of the 2019-20 school year.  12 different Gladiators signed their national letters of intent to play at the next level.

Wil Ferguson has played baseball for twelve years, including all four at JCHS.  He began playing with Alpharetta Youth Baseball Association at Wills Park for both recreation and summer All-Star leagues at the age of six.  He then went on to play full time for travel teams with Team Georgia Baseball Academy, Georgia Bombers, and eXposure Baseball.  Wil was sidelined for most of his freshman year of high school because of a spinal fusion but despite the challenge, he came back stronger and more determined than ever to play to his full potential. Through his hard work he moved through the JCHS Jr. Varsity and Varsity teams as the starting catcher and has been recruited to play baseball at the next level with Roane State University in the fall of 2020. 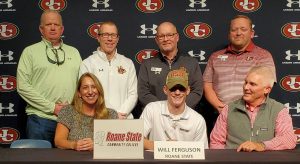 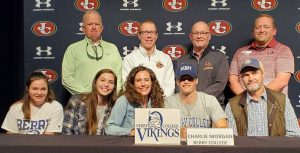 Dalton Pearson has been playing baseball since the age of three years old. He has played on numerous summer league teams that were ranked in the country. His love for the game increased over years and his most notable awards started at the early age of 14 years old. 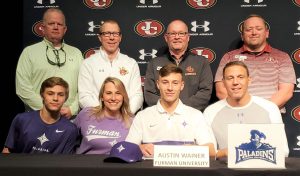 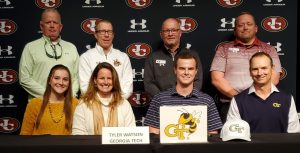 Jack Whitlock has played Baseball for four years and this school year will be his very first playing for Johns Creek High School.  Jack played freshman and sophomore years at South Forsyth High School and at Denmark High School during his junior year.  Awards and achievements include being a 3-year Varsity Player as a right-handed pitcher; helped lead Denmark High School to the State Championship, serving at the starting pitcher in the 2nd game of the State Championship.  Jack will be playing Baseball at the collegiate level for Eastern Kentucky University. 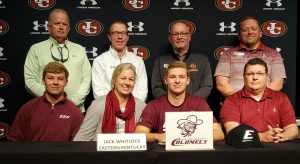 Avery McIlwaine has played Lacrosse for nine years, including all four at Johns Creek High School.  She will be attending Furman University to play Lacrosse.  A list of Avery’s accomplishments include: 2019 6A/7A Student Athlete of the Year; First Team All State Fidfielder; Team Captain; overall MVP, Offensive MVP, and Coaches Award Recipient; 2-time Georgia HS All Star Game Selection; Represented Team Georgia in the U.S. Lacrosse National Tournament and in the Brine All American Tournament; Played travel Lacrosse with Southern Zone Lacrosse Club for five years.  Her academic achievements include: Georgia Certificate of Merit for being in the top %% of her class; President of Habitat for Humanity Club; Six-year member of the National Charity League; Member of the Spanish Honors Society; Member of the Principal’s Student Advisory Council; Integrity, Service, and Excellence (ISE) Award recipient; Two-time nominee for the Governor’s Honors Program in Spanish; Achieved Gold Level on National Spanish Exam; Worked as a coach with the Junior Gladiators Lacrosse Program. 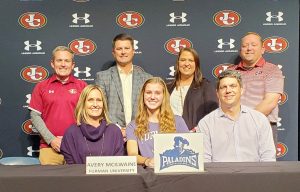 Sandy Salit has played Lacrosse for eight years, three of them at Johns Creek High School.  Sandy was voted Team Captain during her junior year; played five years for Southern Zone Lacrosse, and is on the Honor Roll.  Sandy will continue her Lacrosse career at Mercer University.

Mary Jenell Tredway (MJ) has played Lacrosse for five years, and all four at Johns Creek High School. MJ Tredway is the daughter of Craig and Mary Eva and sister to Madison Tredway.  MJ started playing lacrosse as a JCHS Junior Gladiator and has played throughout high school.  In 10th grade she was selected captain of the JV team and earned the scholar-athlete award. She has played on three travel lacrosse teams (Georgia Outlaws, Thunderbirds, and Fast & Furious) and was selected for the last two years to compete in the National Lacrosse Classic representing the state of Georgia.

In addition, MJ is a member of the NHSS (National Society of High School Scholars) and is actively involved in her church (North Point Community Church) and was a small group leader for 3rd and 4th graders for two years and then for the last two years was selected to serve as a small group leader for middle school students in a program called Transit.   MJ has worked for the last four years of high school as a special need’s student assistant at Johns Creek High School for a program called PALS (Peer Assistance Leadership) and also created an organization with several other friends called “Ignite the Light” where they have sponsor a “Homecoming Dance” for special needs kids.  She has also been a member of NCL (National Charity League) Northeast Chapter since 7th grade, holding several officer positions.  In the fall, MJ will be heading to South Carolina where she has committed to play lacrosse at North Greenville University. 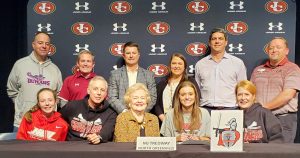 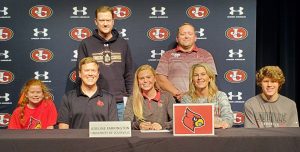 Good Luck to all of our Gladiators in their college careers.  We will be rooting you on but remember you will always be a Gladiator at your core!

No Events This Week

Events are added by athletic staff.
View All Events